Like most of my friends, my friend Liza is a wedding photographer. But she is also a lifestyle photographer who does milk baths. Every time I would see one of these milk bath photos in my Facebook feed, I told myself, “one day I am doing them!” 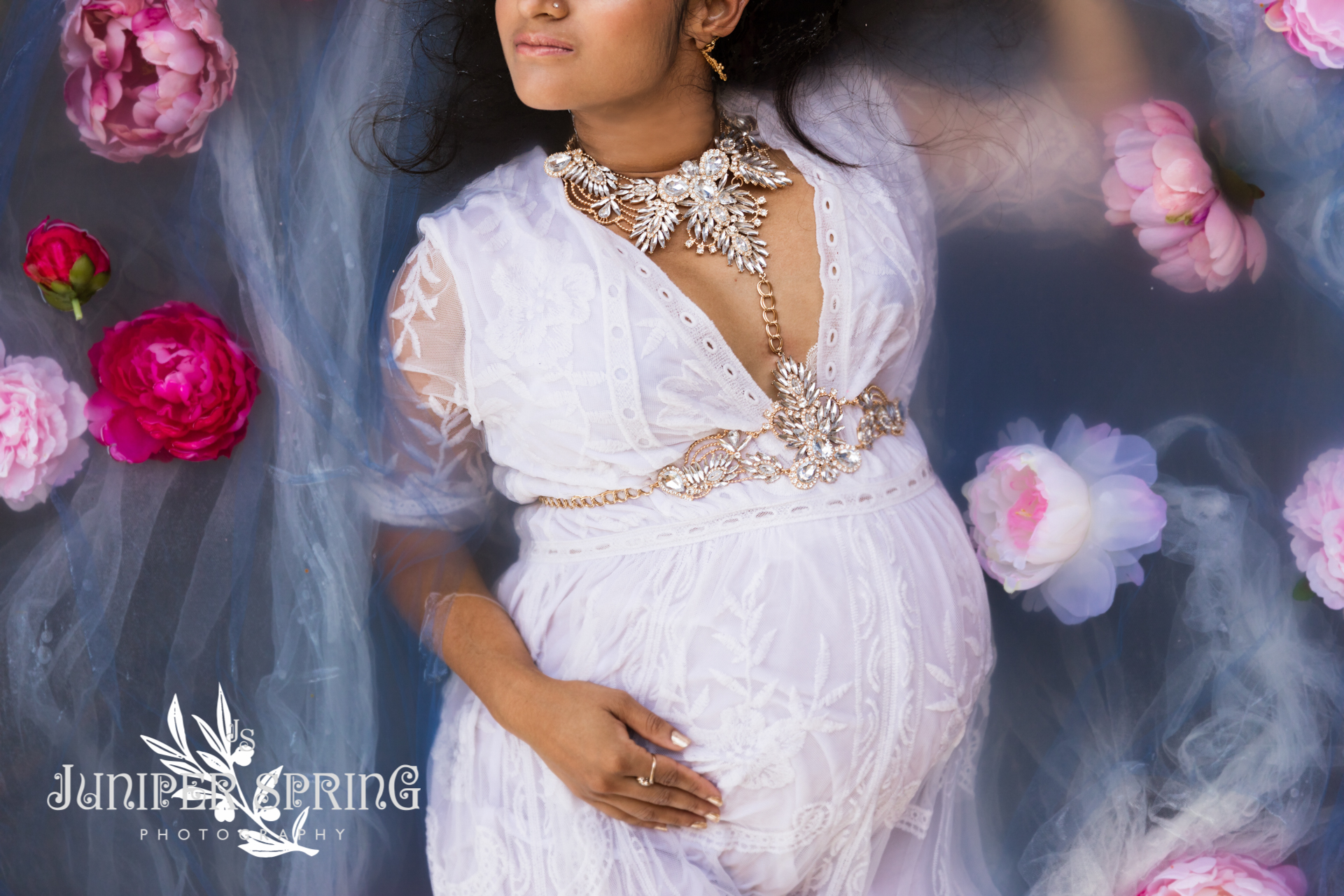 It’s called milk bath because you fill a tub or pool with water and then milk. I know, the Indian in me is saying, “don’t waste food,” but you only need a gallon to provide the wispy effect.

When I was pregnant I realized this was the perfect opportunity to have a maternity milk bath photo shoot. And being a bit crazy (I’ll blame the hormones), I wanted to do something out of the box. Way outside the box. 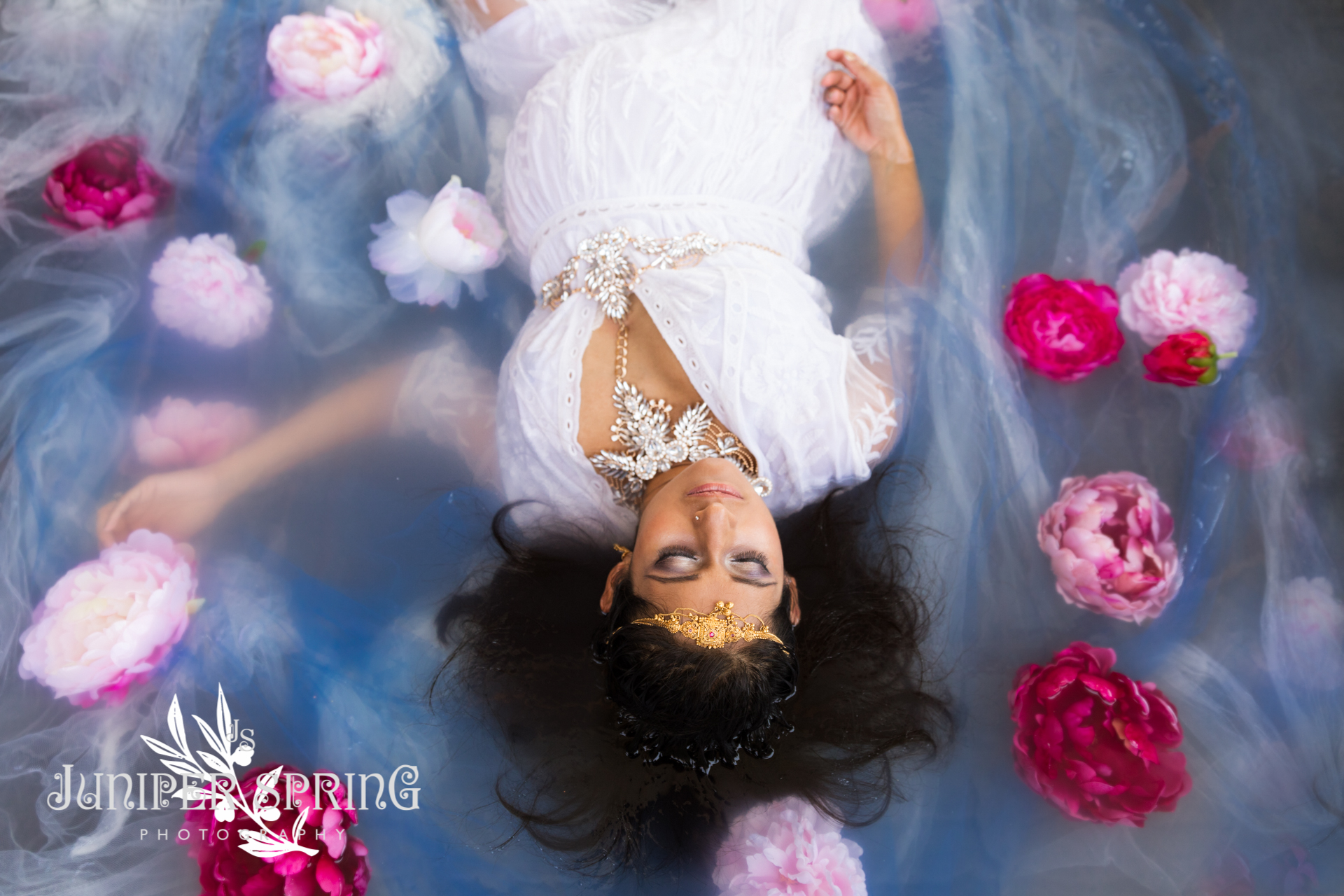 Why not wear a sari? How pretty would that be?! 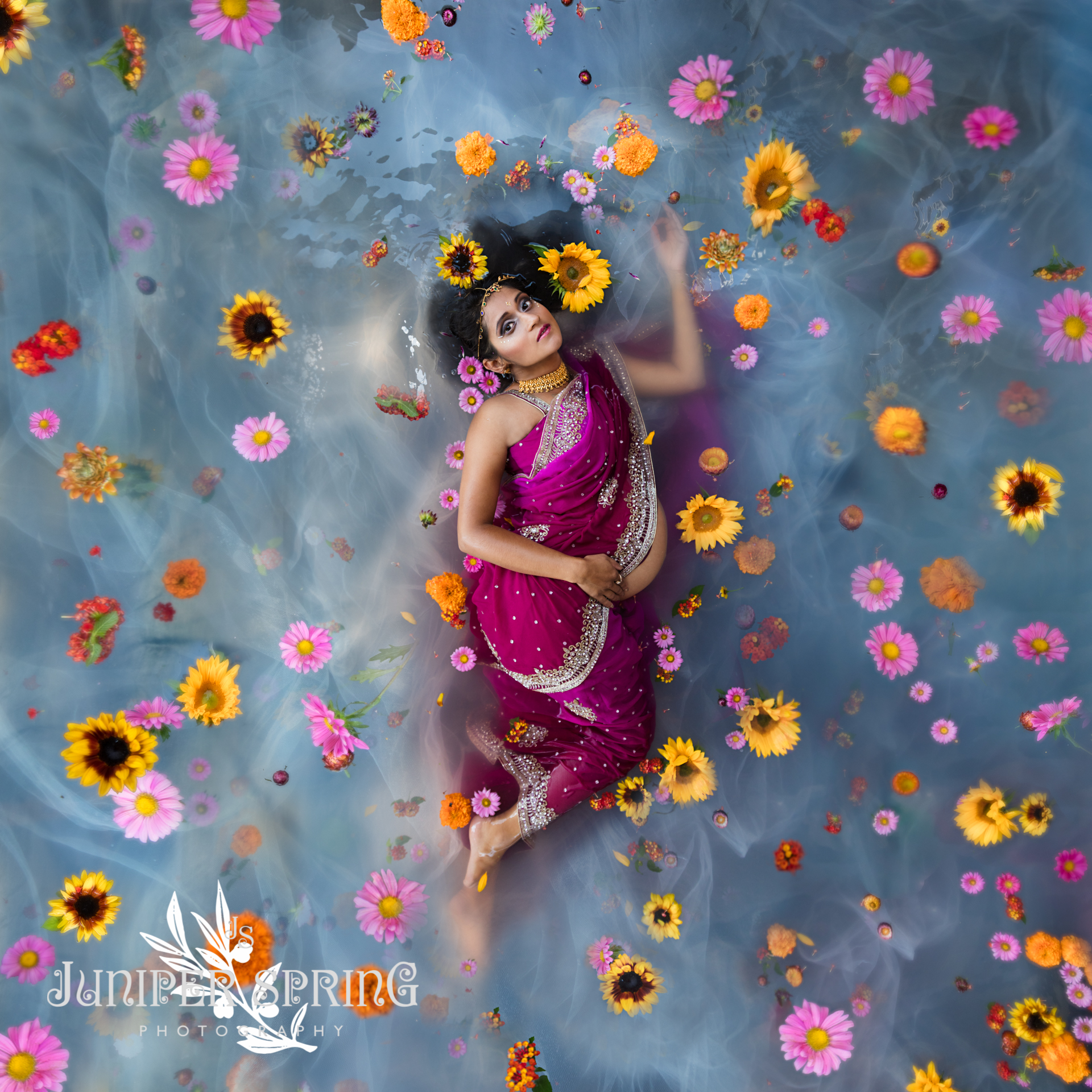 I messaged Liza, who lives on the other side of the Bay Area, San Jose, and told her of my crazy idea. Her instant response: YASSSSSSS.

I pulled out a pink crystal chiffon saree because it has a translucent glimmer in the water. If you recognize the saree, I used for my first maternity photo shoot three years ago.

After making the trek across the Bay to Liza’s place, we had a busy day. The photo shoot took six hours from start to finish from makeup and washing down.

Being 36 weeks pregnant, I was a giant whale floating in the water. Seriously. Between the sciatica pain and hip pain, I couldn’t even turn over by myself! Liza’s assistant would help move me. Honestly, I never felt so old and incapacitated in life. 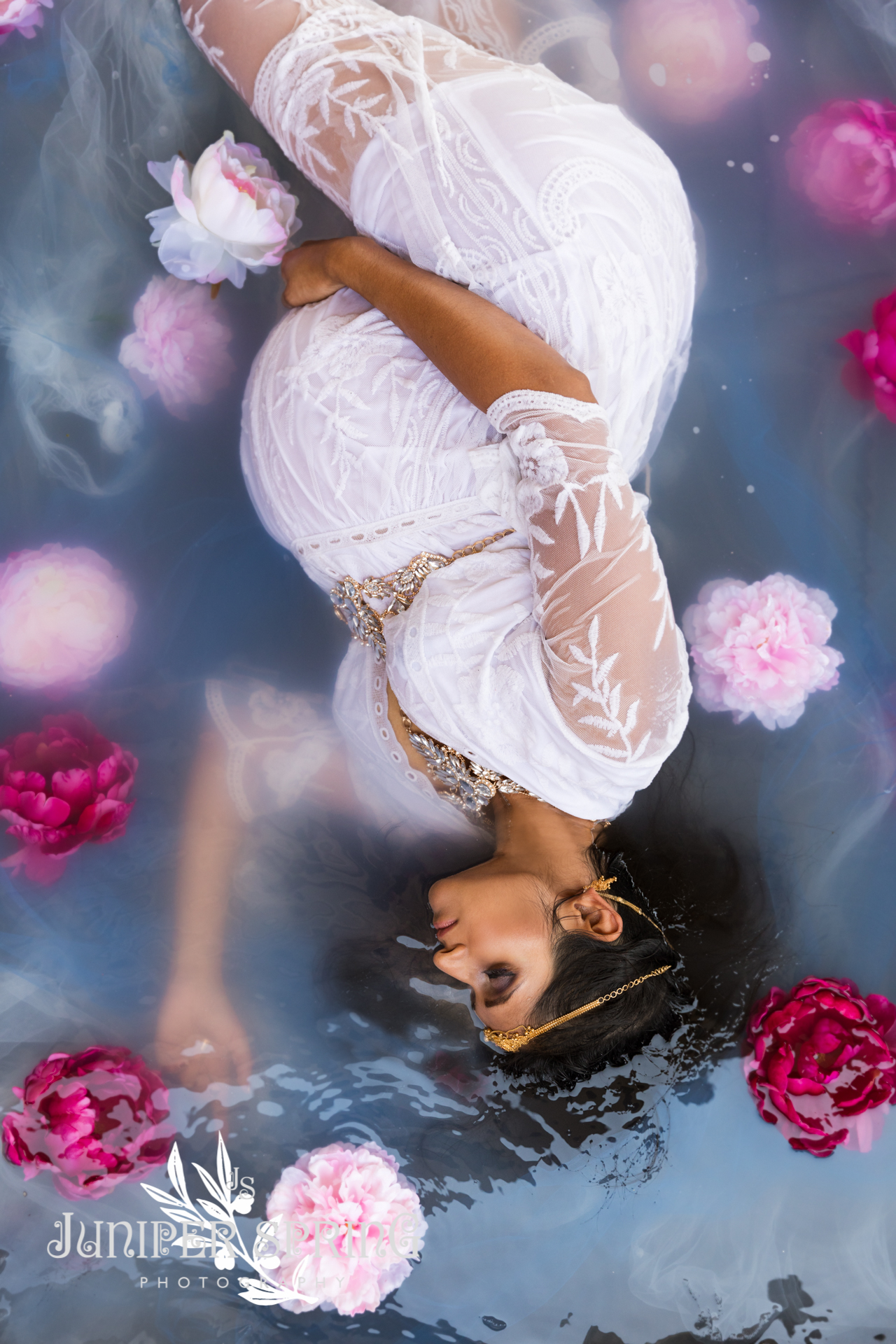 Note to self, get a message the next day because your body will be dead. 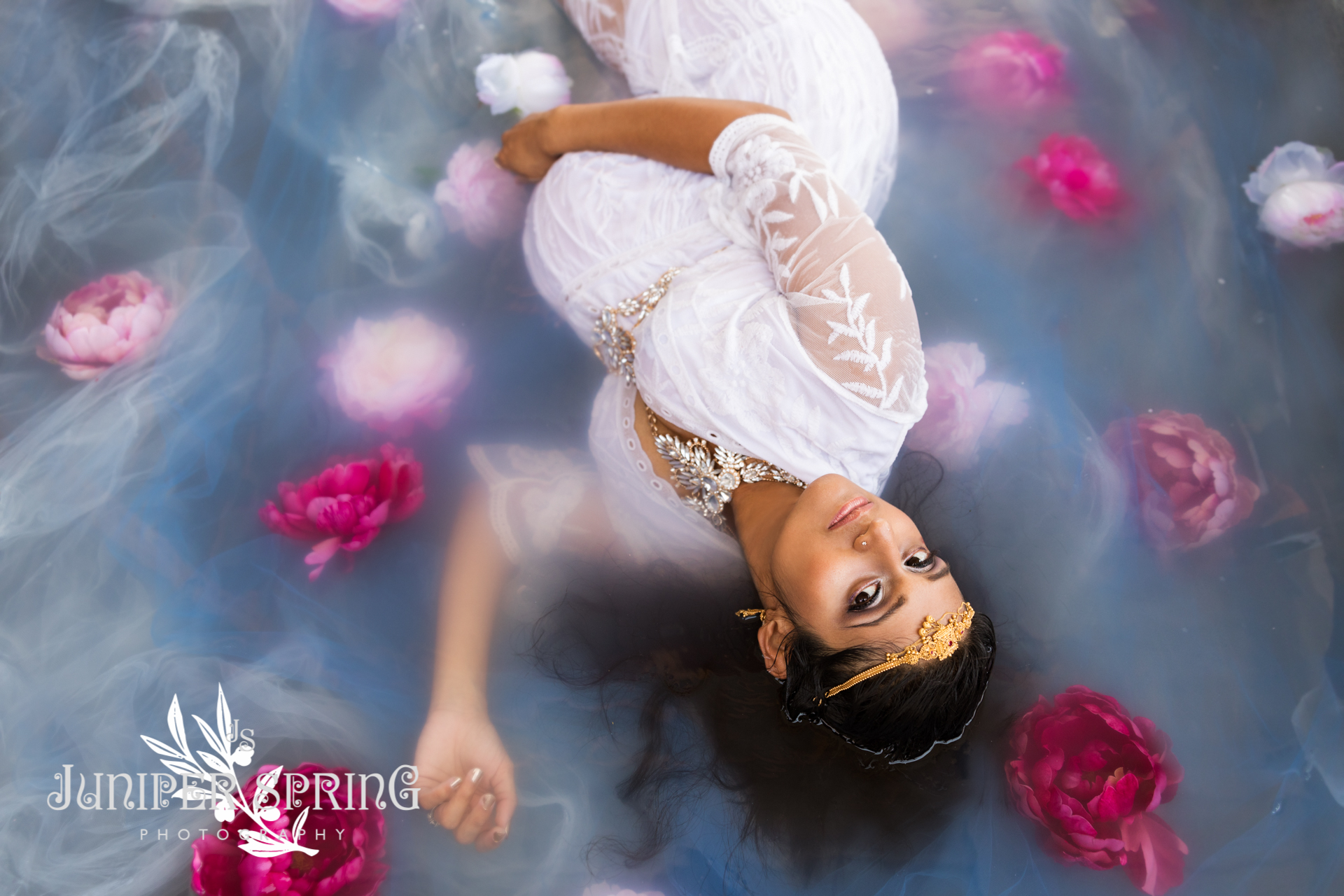 One of the highlights of the shoot was being beautified by the makeup artist. Having someone else do your makeup really makes you feel like a princess. Kim, our MUA, does not specialize in Indian style makeup, which I loved.

I wanted something light and eternal, but glittery. You know you’re Indian when you keep saying, “more glitter, more glitter, MORE glitter! There’s never too much!”

I am sure she thought Liza and I were insane, but you don’t often get to do an Indian maternity shoot. It’s an opportunity to push the boundaries – you can only have photos you dream of if you make it happen in reality. 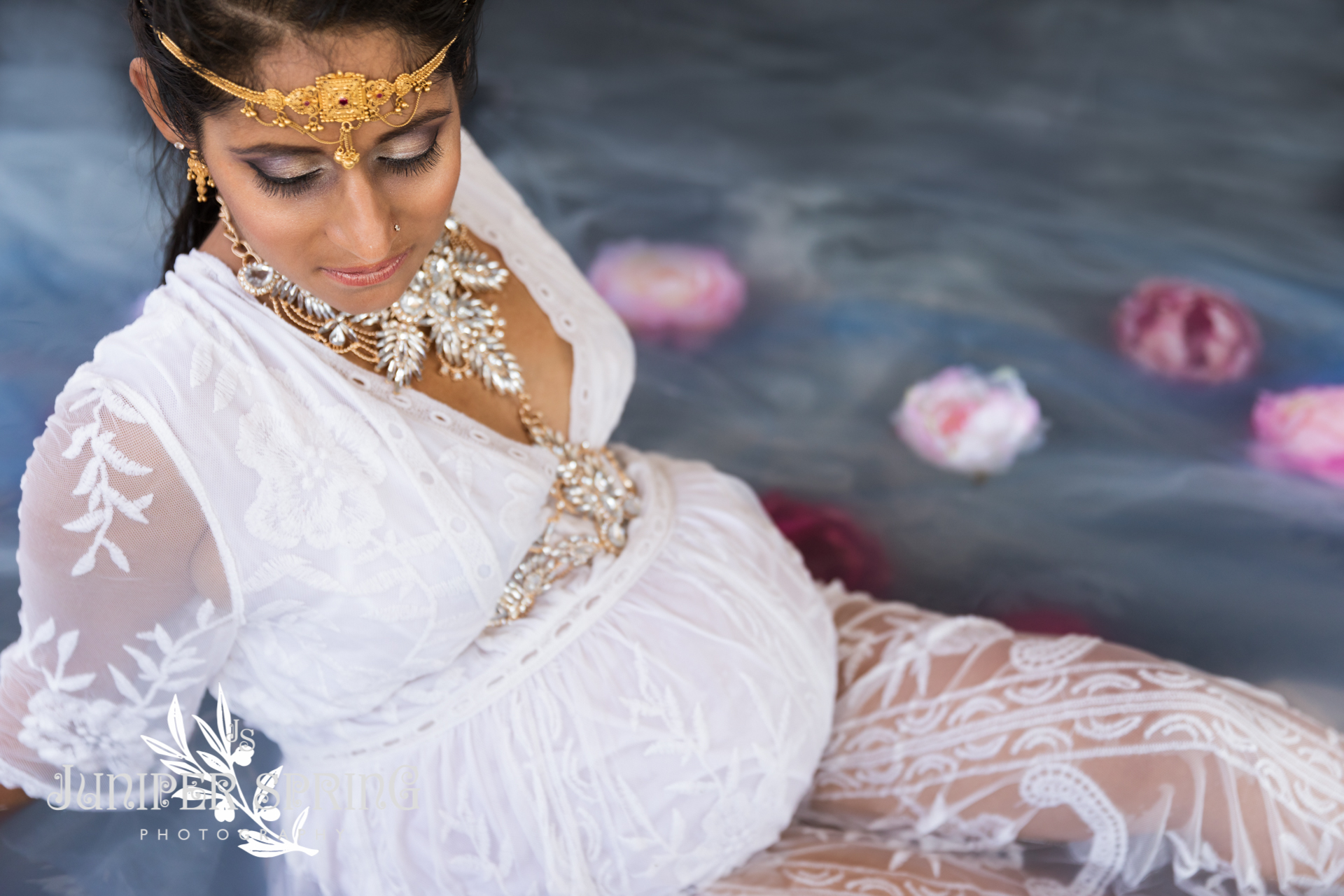 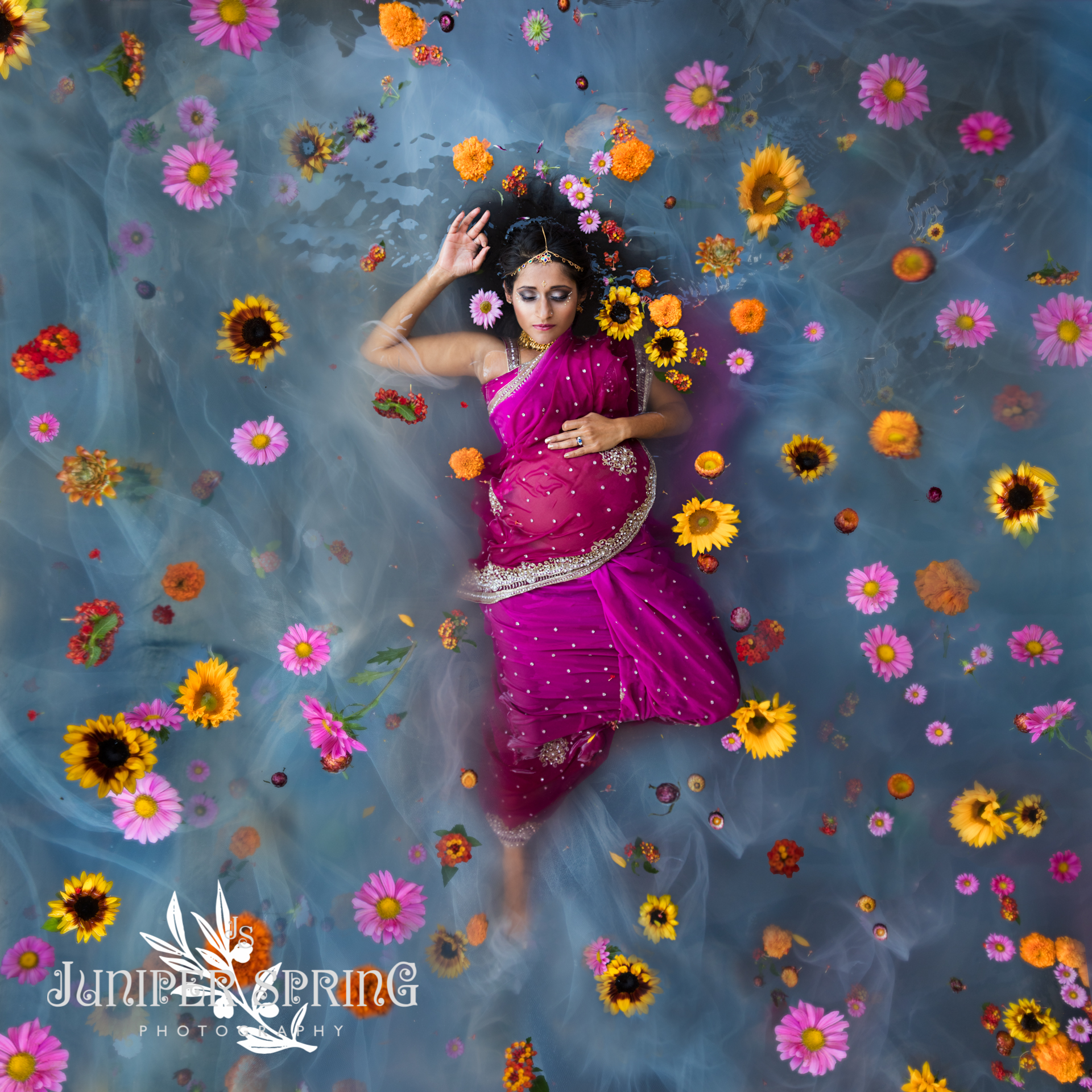 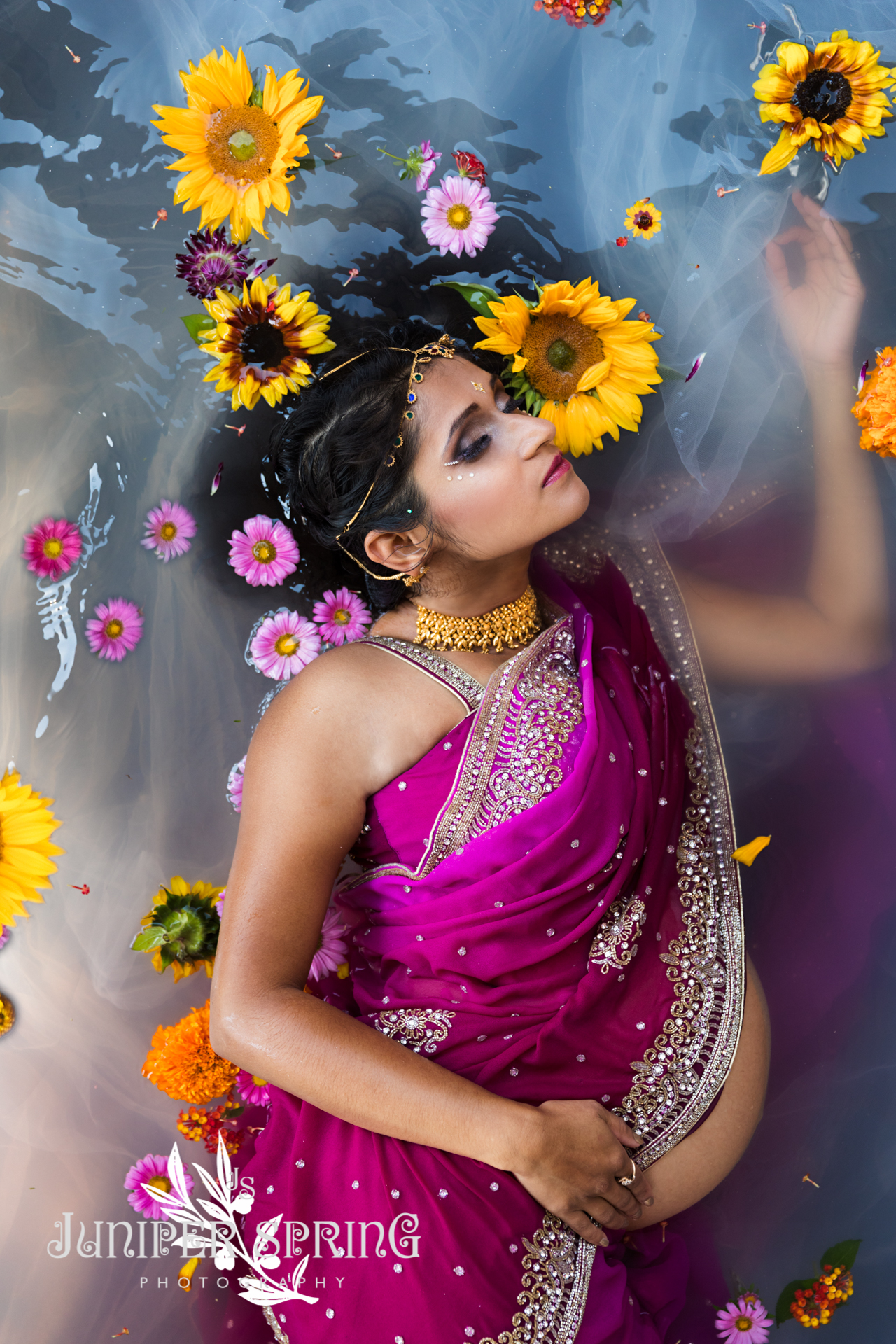 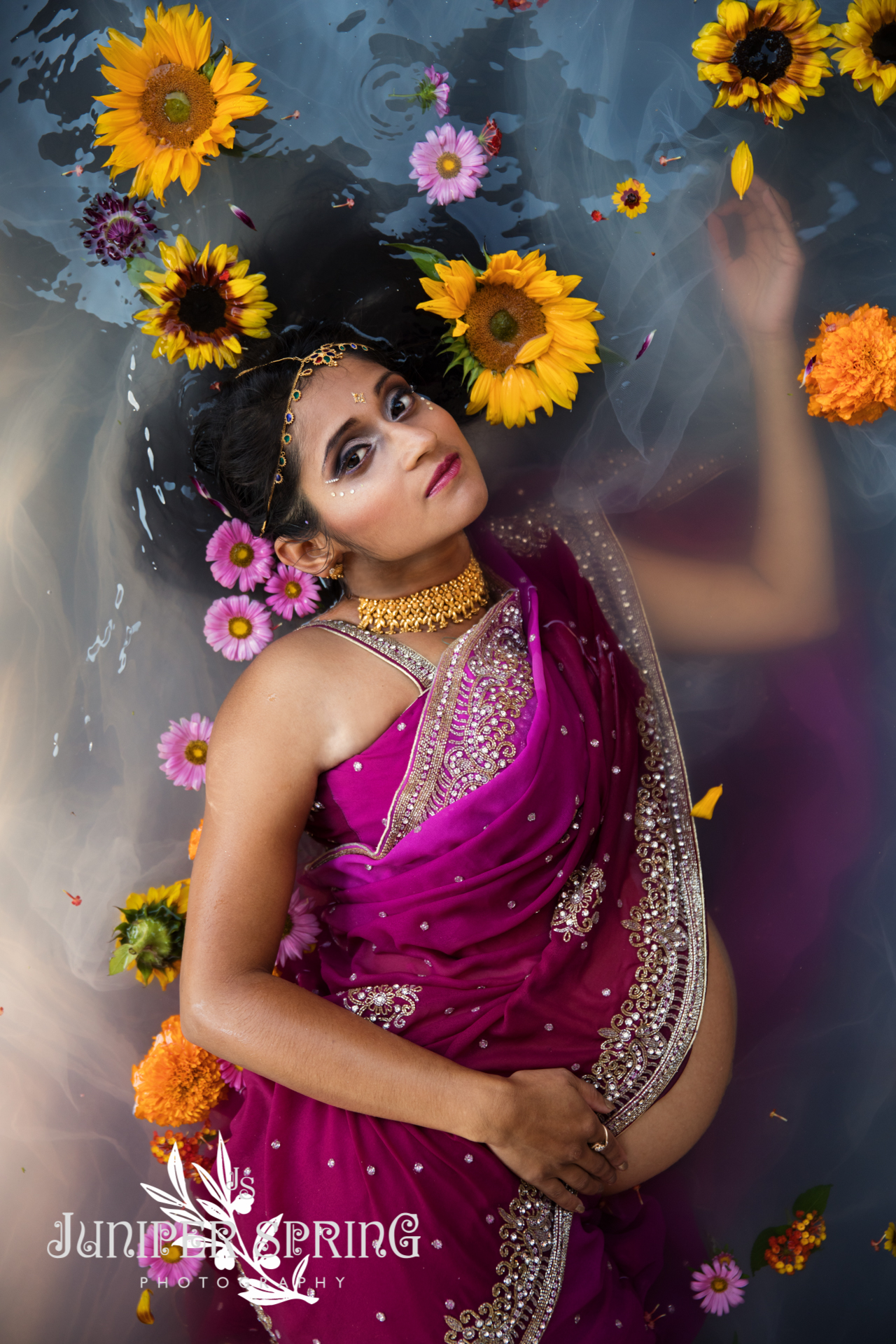 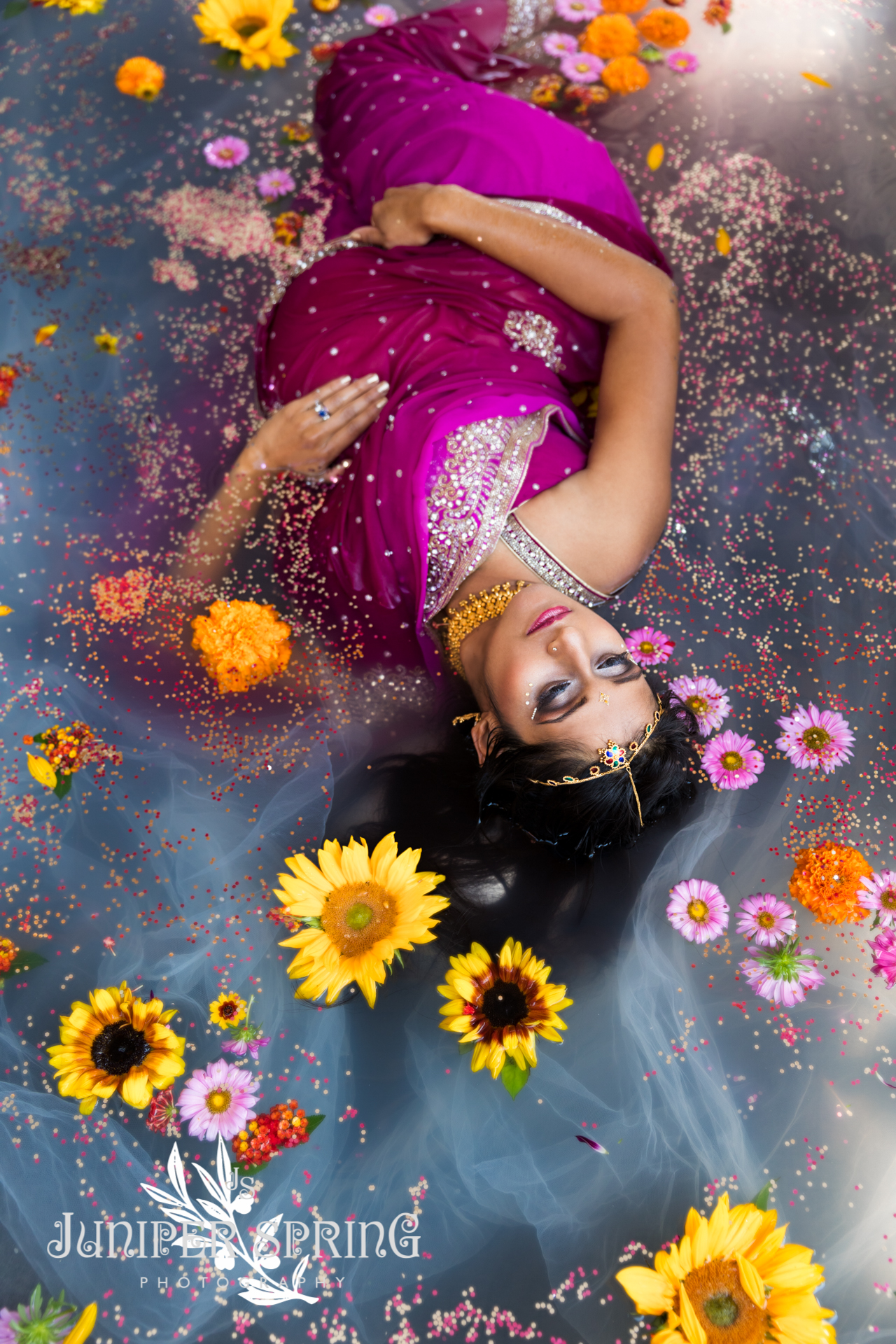 Overall I couldn’t be happier to celebrate a part of me, being Indian, and a special moment in my life of being pregnant. Even though I was exhausted after, these are the kind of photos you print and place on the walls. No pain, no gain, right? 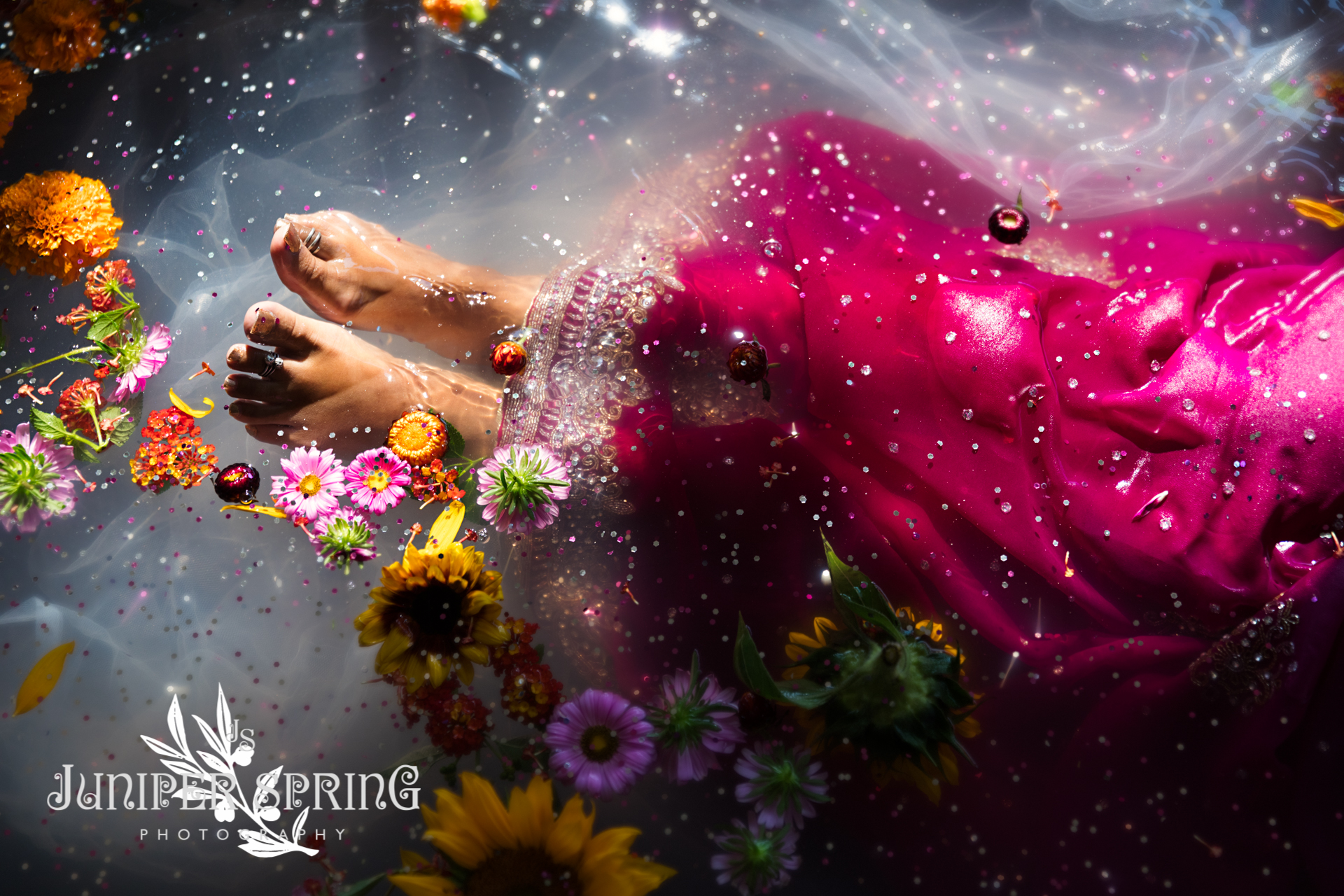 Thanks to Liza Head of Juniper Springs Photography, Kimberly Brown for the makeup, and Liza’s assistant for rolling me around in the water.