Last night turned into one of those nights that that you don’t believe could get worse but ends up getting worse.

I was called from daycare in the late afternoon because kiddo had a big accident. It all over the floor because it (the poop) leaked from his shorts. He was so beside himself that he ran into the bathroom crying. When I arrived, the mess from the floor was cleaned up but he was still in the bathroom – he wouldn’t let daycare mom touch him. 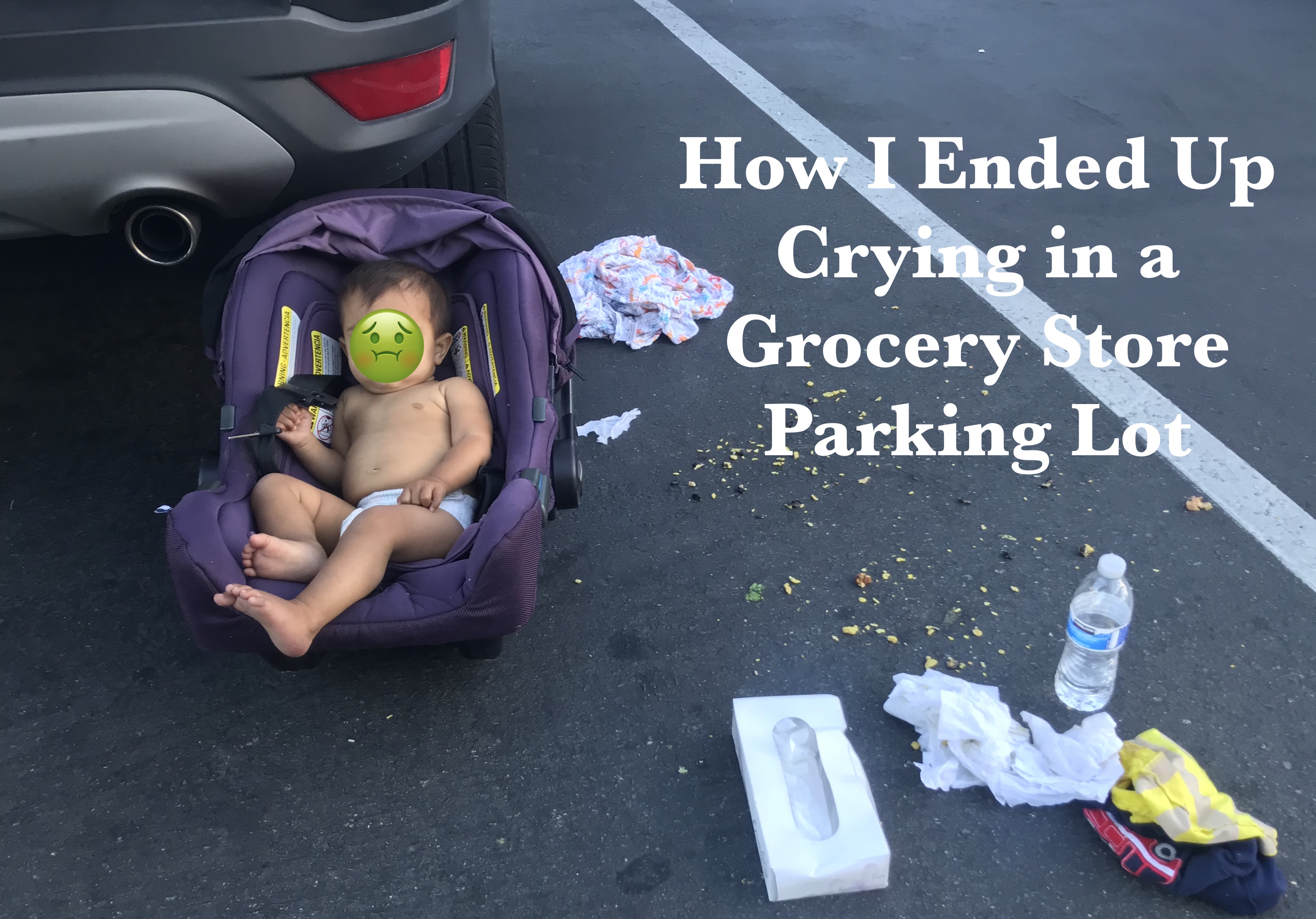 I got him partially cleaned and we came home and showered. Spirits improved and the three of us had a nice dinner of rice and dal (simple but tasty and nutritious). After dinner, kiddo was excited to go grocery shopping to get the rabbits’ food.

For a grocery store experience with two little ones, it was easy peasy. Kiddo snacked on green beans and an apple. Sister was smiling to everyone she met. No crying, yelling, or otherwise meltdowns we associate the grocery store and baby+toddler. The gods were on our side!

Hahaha, not so fast.

Once finished with shopping, we packed up baby into the car seat and then kiddo into his car seat. All of a sudden we heard “blurp blurp”. We looked over at sister, she had thrown up all over herself, the car seat, and the car. There was food everywhere.

In typical toddler style, my son says, “it’s a mess. my car is a mess! we need to clean this is.” Yes babe, we do. And no, I don’t know what’s wrong with sister.

Pulled baby and seat out of the car, then opened the trunk of the car. Kiddo climbed in and said, “me stay here. no car hit me.” Good idea.

There we were, cleaning baby’s car seat in the middle of the parking lot at the grocery store. She was on the ground with a nice coating today’s and yesterday’s food.

In typical parent style I didn’t have wipes, though we surprisingly had a roll of paper towels and an old bottle of water. Cleanup the old fashioned way. And the irony that the we were 100 feet from the doors of the grocery store wasn’t lost on me. The grocery store was this tantalizing night club you just couldn’t get access to.

In all the cleaning up, I was bummed out. I feel alone. Nobody stopped to help or speak to me. At least 30 people passed us by. One lady stopped by and handed me a box of tissues and said, “I’ve been there”, then walked off.

But in a parking lot full of people, I was alone with a 3 year old and puked up 8 month baby. Everyone was in their own world, perhaps staring at their grocery lists or looking at Instagram – too busy to stop by and say, “hey, let me help you mom.”

It was lonely. And depressing.

We pushed on, the three musketeers. I got baby cleaned up and back in the car seat. Kiddo was happy she was looking better. We went back to our usual banter of the color of cars. Slowly driving out of the parking lot, I hear “blurp blurp” again. I call out to kiddo and he says, “baby threw up again. no good baby.”

Drove the car back into a parking space. Baby is giggling the whole time (puking is fun?!) and brother says, “no more throw up baby. Me is here, it’s okay. Me is here.” For all that he is, he is loving brother.

This time after pulling out the car seat and cleaning up even more vomit, I had tears. I don’t know why. Perhaps because I felt lonely that the world goes by and doesn’t look at you. Perhaps because I didn’t know why baby was throwing up again. Was she sick? Is the constipation making her vomit? Is she eating the wrong foods? Who knows.

I was somewhat lucky that my husband arrived to the local BART train station after the second vomit. He met us at the grocery store and took care of the rest of cleanup. Even though it was 45 minutes after vomiting first began, I wasn’t alone anymore.

If anything from this experience I learned that if you see a mother in need or looking upset, help her out. STOP. Go see what she needs, a couple minutes of your time would mean the world to her. It’s okay to put your phone away and look at the world.

Because you don’t want to end up crying in the parking lot of the grocery store.